If anyone dismisses this as just another anti-SJW piece, you're missing the point. Read it again

I've been shown some further evidence that was dug up after my complaint. Some I've seen before, some brand new. It certainly doesn't paint Joe Queer in a good light. I believe that they hoped I would update my post with links to said evidence, in the spirit of fair journalism.

I appreciate the sentiment, it's a valid point. But I refuse, on the grounds that it doesn't matter that I have the evidence, what matters is that the general public still doesn't, because the petition hasn't been updated to reflect this. Nitpicking, I know. I don't care. I'm frustrated because I've taken every chance I could to be civil and was ridiculed and mocked the entire time, mostly behind my back. Now, finally a peace offering of sorts. I get it. But I won't do it. Call it a matter of principle, call it me being stubborn and frustrated.

It's YOUR responsibility to make this evidence public. You started it, you finish it.

As for the general public, you can also contact Babely Shades on Facebook (there's link the text below somewhere) and ask them for the list of links. You really should, it'll make you think twice about the whole thing. Might not change your mind but it'll nudge it a bit. 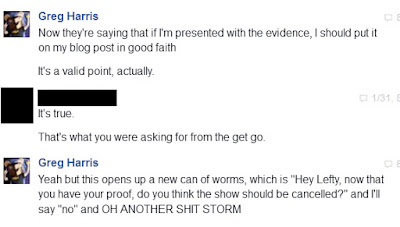 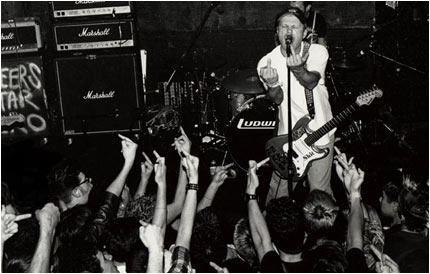 This time around, it's someone who doesn't want The Queers to play in Ottawa. They made an online petition and have posted it on the Facebook event page for the show. Take a look, then come back and we'll talk.

You're probably expecting me to be all "This is bullshit PC police bullying, let the band play, freedom of speech, neener neener", but I'm actually not.

Not that I agree with these people. Fact is, I don't know who to agree with, because I know literally nothing about Joe Queer and the things he's said and done in the past. But here's what I do know: this petition does DIDDLY FUCKIN' SQUAT to convince me. I read the whole thing and, based on the meat of their argument ("This band is known for holding and perpetuating anti-Black and transmisogynist views"), I thought hey let's click the link they provided to see what proof they have.

To sum up their proof that The Queers are spreading anti-Black and transmisogynist hate speech, we have:

1) Lead singer Joe Queer has indicated that he maybe supports Darren Wilson after the shooting death of Michael Brown, and posted a link to a fundraiser in the policeman's honour.

DISCLAIMER: I think the cop is an asshole who should burn in fuck hell for eternity

2) Joe Queer sort of defended Ben Weasel for punching a lady who may have had it coming.


Their complaint specifies transmisogyny yet there's no mention of it at all in either the petition or the linked article. It seems that this accusation is either a) because he associates with Ben Weasel, who has used the word "tranny" in a derogatory way (but there's no direct instance of Joe defending Ben Weasel's alleged transmisogyny) or b) they think that Ben Weasel and Joe Queer are the same person. I'm going to go with A, which means the petition is based on the fact that he's friends with a person who used a derogatory slur in a blog post.

As for anti-black preaching, there's only the instance of Joe Queer offering some level of support for Darren Wilson. While I understand that supporting Darren Wilson might seem a little sketchy, it doesn't immediately equate to racism or the preaching thereof. That's an awfully dangerous leap to be making, especially when you're trying to cancel the band's performance.

It's one thing to think "This man is an unsavoury character, I would not give him the time of day if I met him because he has ugly thoughts, and I certainly wouldn't go to his show if it puts money in his pocket". It's another thing to say "This man in an unsavoury character, I'm going to go out of my way to stop him, as well as his band, the opening bands, the venue and staff, from getting paid because I don't agree with his ways". If you're going to go that far, you'd better damn well have something to back up your complaint besides one flimsy article that really doesn't say much.

What I'm trying to say is: if you're gonna fuck with people's shit in your self-appointed role as social justice warrior, be prepared to do it responsibly. Think about what you're posting, think HARD; baseless accusations make you look like an asshole and give proper social justice warriors a bad name.

The group responsible for the post is Babely Shades.  This Ottawa group exists for the purpose of dismantling "the white supremacy in our communities in order to allow more folks of colour to participate in local arts". A commendable goal to be sure, but I have beef with their methods.  When they posted the link to the petition on their own page, the expanded the claims against The Queers:

Violent artists shouldn't make a cent off of this city. Artists who support and promote white supremacy, police murders and transmisogyny are hurting marginalized people.

Now the band is "violent". The entire band. Because Joe Queer is friends with Ben Weasel. Now this band supports and promotes white supremacy, because of one link posted on a Facebook page.

These are VERY strong words in today's extra sensitive climate, and they're being used with the utmost irresponsibility by people just looking for a fight. Well I gave it to 'em.

I asked them to provide further evidence of Joe Queer's evil ways: 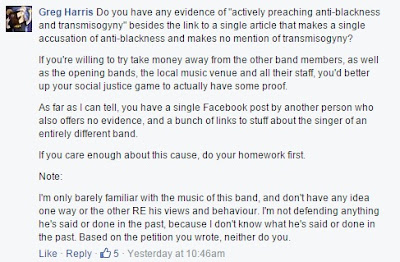 I was met with immediate hostility. I was mocked and ridiculed, or told to do the research myself.

-that article is pretty comprehensive and has a lot of damning evidence if you actually read it over
-I don't think you understand how racism works
-where did u study law [in response to my claim that they're committing defamation and could be sued over these kinds of things]
-perhaps my disdain for you was clouding my perception
-it shouldn't be an expectation that every time someone sputters 'fascist!' people should rush to provide receipts for said person, especially when the links are within 3 cm of clicking space

On top of all that, here's a delightful photo essay that a trans woman put together for everyone's benefit: 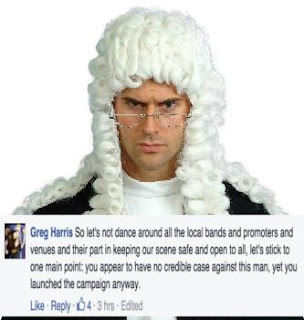 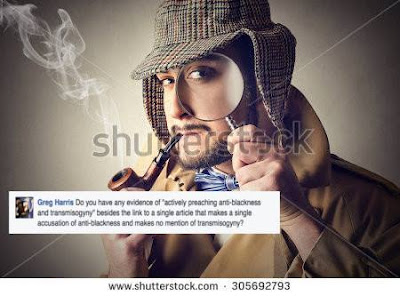 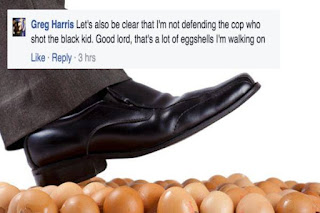 Uhhhhh... I don't even know how offended I'm supposed to be, because I still stand by the very words that they're using to mock me, so... ?

Anyone familiar with hardcore social justice warriors already knows the problem: the colour of my dick. Because I'm a cis white straight dude, I'm immediately ignored or mocked. The worst kind of social justice warriors will immediately dismiss my comments and opinions, and if I call them out on it (ie in a post like the one you're reading now), then here come the mocking cries of "Oooh look at the white dude who's all butthurt because no one listens to him".

I don't believe in some Original Sin that I've committed by virtue of having a white dick. I have helpful thoughts and opinions too, much like many of my white dicked brethren. If you want white cis dudes to fall in line, you have to listen to what they have to say. This is what you want them to do for you, isn't it? To listen to you instead of dismissing you?

A few lines back I said "the worst kind of social justice warrior", meaning there must be a best kind, right? I happen to be friends with one. Not "getting coffee together" friends, but online friends who occasionally bump into each other in public. We disagree on quite a lot of things, but we also respect each other's general level of intelligence, and our discourse shows it. When it comes to social justice issues, she's very good at listening to what I have to say, and then telling me her point of view in a way that makes me think about what I just said in a different context. She has the ability to sway me because instead of brushing me off, she engages and enlightens. It's amazing and I've frequently referred to her as my favourite social justice warrior.

Listen: if you're going to use your social justice powers to make change, by all means do it. Your voice has every right to be heard, as does mine and anyone else's. BUT if you're going to the go the extra step and start an online smear campaign in order to remove money from a professional musician's pocket (as well as all the collateral damage listed earlier), you'd better damn well back up your claims.

This Queers petition is slacktivism at its worst, and an outright abuse of social justice power, and it needs to be rectified: please sign my petition

Lefty McRighty
My name is Lefty and I do music and radio and science and beer and hypertension medication. I don't smoke anymore.